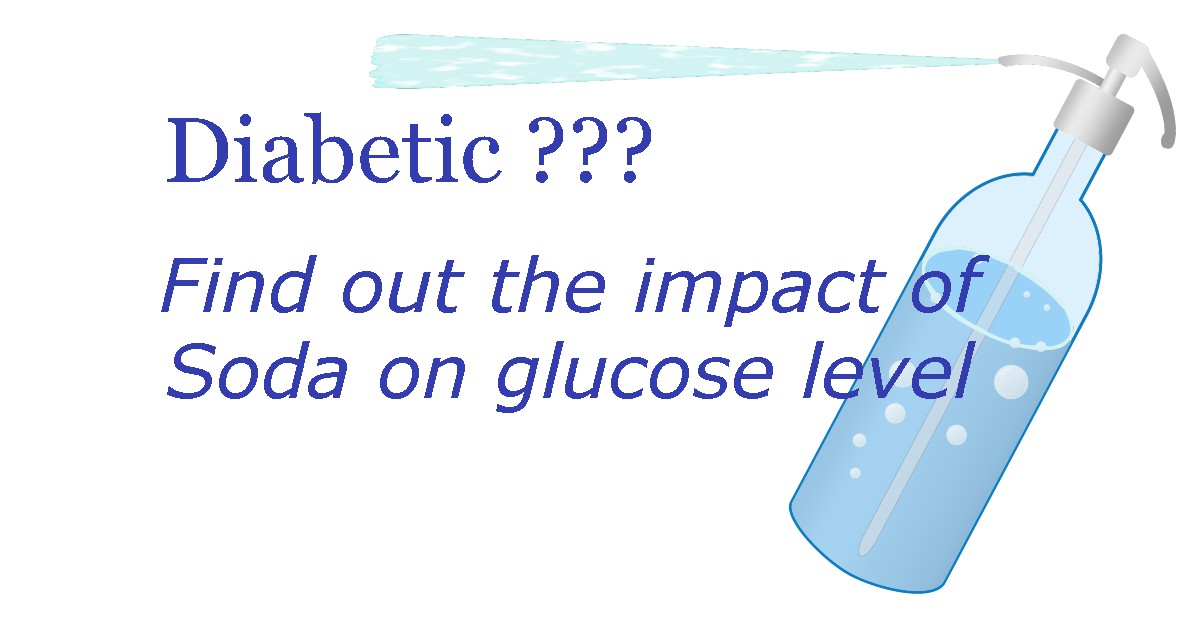 Most people associate sugar-filled candies and drinks as unhealthy since they think it causes a spike in glucose. Soda water is among the sugar-filled drinks associated with blood glucose spikes. Different people have varying opinions about blood sugar levels after taking a soda. For instance, one Reddit user expresses his dilemma on soda water based on nutritional advice from his cardiologist and actual readings. The cardiologist advised that taking a soda spikes blood sugar levels. However, blood sugar readings after drinking a soda do not show a spike.

Another Reddit user, gives a contrary opinion about sodas and blood sugar levels. The user drank two diet cokes two hours after his meal. He noticed that the sugar levels were higher than normal. The user is in a dilemma because diet coke lack carbohydrates. Thus did not expect the blood sugar to spike. In my humble opinion we should compare apples to apples. Diet coke is not a soda, it also contains other ingrediency that can provoke the spike. So the contradicting opinions made it crucial for me to research the truth on how a soda influences blood sugar levels. To get a conclusive answer, I experimented as described in the below:

Is soda water bad for you?

Is carbonated water really bad for you? That’s the question most diabetic people would wish to answer as they cautiously identify foods that cause a blood sugar spike. The simple answer to the question is no. Soda water does not hurt your blood sugar. The following experiment explains why.

For this experiment, the aim is to determine the impact of soda water on blood sugar levels. I used the Schweppes soda water that I purchased from a grocery store. I observed my blood under a microscope on an empty stomach and 40 minutes after taking the soda. The ultimate impact would be determined early in the morning when I had not eaten or drunk anything else.

I took the first blood sample on an empty stomach and observed it under a microscope. I zoomed the view 200 times and noted that my blood was below average. It was not alarming because I had been lenient on my diet the past few days. The view showed aggregated erythrocytes on blood islands. When zoomed at 800 times, a closer look depicts long chains of the erythrocytes attached to each other. Zooming the blood sample 2,000 times showed the flow of blood, which was not so bad. The blood sugar level reading on an empty stomach was 4.9.

After the first experiment, I drank 250 ml of a carbonated drink and waited for 40 minutes. I then took a blood sample and observed it under a microscope. A view on 200 times zoom did not show much with the first experiment. I saw the islands close to each other, as in the above experiment. I zoomed the view 800 times, where it was evident the blood condition had some slight improvements. I could spot single erythrocytes and reduced the length of the coin stacks. An observation after zooming the blood sample 2,000 times does not show a change in blood flow. The blood sugar reading shows a slight increase since it reads 5.2.

Based on this experiment, I would prefer to drink soda water if I did not have access to pure water. My blood sugar showed slight improvements after taking the soda water since the erythrocyte chains were reduced. The changes align with what I observed in a similar experiment involving pure water, as documented in this video. However, it is essential to note that pure drinking water has a much better impact on blood condition.

Hence, even though soda water is not bad for you, people with diabetes should drink it occasionally. You can also check Hematic food youtube channel to find out how Mineral water affects the blood condition and glucose level.

The above experiment demonstrates that the association of soda water with a blood sugar spike is just a misconception. Diabetes patients have similar misconceptions based on the sugar levels in foods and drinks. However, some foods with fewer sugar amounts might have a more detrimental effect on the sugar spike. The article’s purpose is not to encourage diabetics to indulge in sugary foods. Instead, the article aims at creating awareness that other less sugary starch can spike sugar levels.

It is normal for people to choose a bagel over a donut when making a healthy meal choice. However, a bagel, even though less sweet than a donut, has a higher impact on blood sugar levels. Unlike a bagel, donuts are sugar-filled. The carbohydrate component is higher in a bagel, which releases more glucose in the blood. Therefore, a diabetic patient who chooses to eat a bagel over a donut will have a higher sugar spike.

Potatoes are considered to be vegetables. Nutritionists recommend them to diabetes patients. However, baked potatoes are rich in carbohydrates. It is likely for people with diabetes to experience a spike in blood sugar levels after eating the potatoes. It is interesting to note that chilled potatoes have a lower level of carbohydrates. Alternatively, people with diabetes can substitute potatoes with cauliflower rice and beans. The two foods have a higher nutritional value and will result in greater patient benefits.

It is recommended that individuals seeking to control their blood sugar levels should eat foods rich in fiber. The soluble fibers are even more recommended due to their ability to reduce blood sugar in the digestive tract. Examples of viable sources of soluble fiber include oats, nuts, citrus fruits, apples, and beans. Creating a habit of this group of foods will help further regulate the amount of glucose absorbed in the blood. As a result, people with diabetes can manage their condition better.

Where is sugar removed from the blood?

Glucose is a fundamental source of energy for the human body. The body uses a natural process to convert carbohydrates eaten into glucose during digestion. The body cells have the responsibility of absorbing glucose into the bloodstream. However, the liver plays a major role in the healthy elimination of glucose from the blood.

The liver plays a major role in the extraction of glucose from the carbohydrates eaten. It does not stop there; the liver is the storage place for the extracted glucose. It regulates how much glucose will be released into the bloodstream. The body stores glucose in the form of glycogen in a procedure stirred by insulin. The body easily breaks down glycogen to form glucose when the need arises. Glycogen creates 10% of the liver weight. Alternatively, the body stores glycogen in various body muscles. However, the glucose converted from this glycogen can also supply energy to respective muscles.

Diabetes hormones play a major role in the absorption and conversion of glucose in the liver. Type I diabetes cannot produce insulin, creating challenges in glucose absorption from the bloodstream. Type II diabetes patients produce insufficient insulin to absorb the glucose and facilitate its conversion. Therefore, the same procedure helps eliminate glucose from the bloodstream for Type I and II diabetes patients. Blood sugar regulation is a key practice among diabetes patients requiring them to select the food to eat carefully. People with diabetes often avoid foods likely to cause a blood sugar spike to maintain a healthy lifestyle. Even though soda water is sugary, it does not spike blood sugar levels. Hence, diabetics should not be afraid of taking soda water occasionally. It is essential to note that the drink should be taken in moderation since it has sugar. Taking so much of the drink can change the glucose readings. People with diabetes should strive to differentiate the misconceptions about some foods by identifying the actual carbohydrate content in a portion of food. The measure will better help to regulate blood sugar levels and uphold a sustainable diabetes management practice.