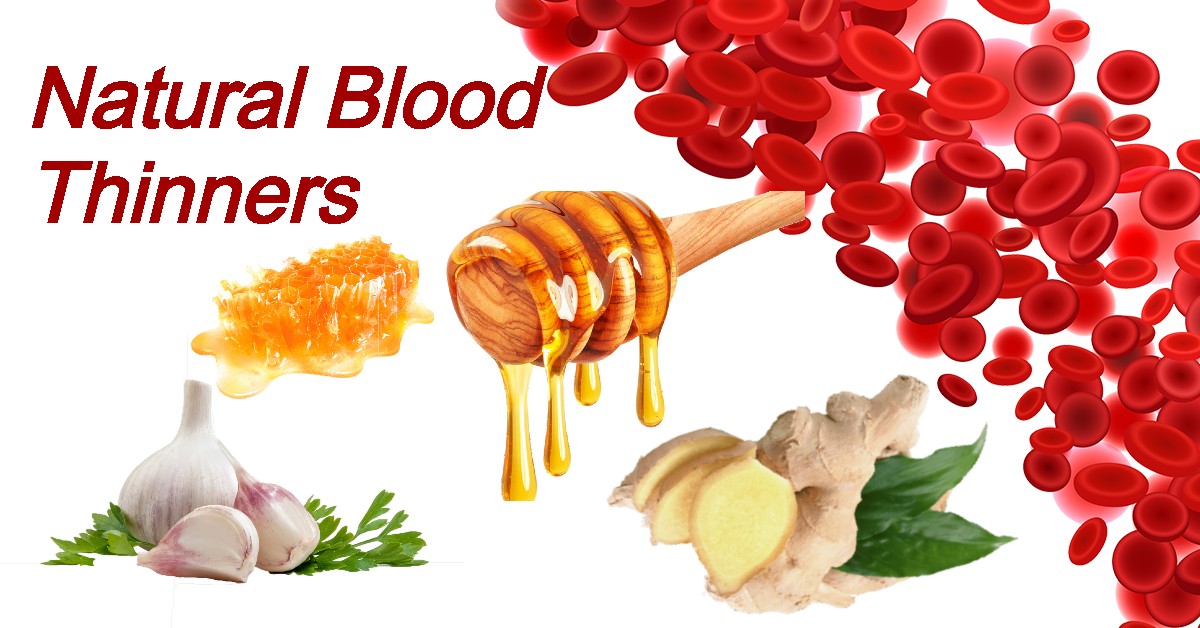 Eating the right diet depends on several variables, such as body type, stage of life and lifestyle. No one diet suits all. This is the reason we need to start paying attention what we are eating or drinking. I don’t believe it is a secret that whatever we eat or drink can affect our blood condition.

Natural blood thinners can help us to reduce the blood’s ability to form clots. It will also increase the oxygen level through out the body. The blood does need to clot but sometimes too much clotting leads to complications that can be dangerous.

Natural blood thinners or blood thinning medication can be beneficial to the people with a certain medical conditions like heart disease, if the risk of stroke is high or risk of heart attack.

It is essential to speak to a doctor before trying any natural remedies as they may not work as efficiently as medications, or they may interfere with the efficacy of medications.

Some foods and substances that may act as natural blood thinners may include the following:

Turmeric has been used medicinally for 4,500 years. It can be found throughout the tropics; however, India has been the largest producer of Turmeric. The active ingredient in Turmeric is curcumin known for its blood thinning and anti-inflammatory properties.

Turmeric is usually used in cooking. Indian people adding it to curries or soups. Turmeric is also one of the ingredient in chai latter or other herbal tea’s. Regular consumption of Turmeric may help with the thinning of the blood.

In the hematic food blog we already saw that Ginger can be considered as a natural blood thinner. If you haven’t seen it yet. You can always watch it Ginger affects our blood condition. It contains a natural acid called salicylate. There is also a patented acetylsalicylic acid known as Aspirin (acetylsalicylic acid). It is a synthetic derivative of salicylate though.

To get the anticoagulant effects of natural salicylates, Ginger can be used fresh or dried, regularly in baking, cooking, and juices.

Cinnamon contains coumarin, a powerful blood-thinning agent. Coumarin extract is known as Warfarin. It is very well known pharma drag, it was introduced to human back in 1954.

Large consumption of Coumarin likely to cause a liver damage, if it is consumed for a long period of time.

Ideally cinnamon should be consumed in a small quantities and for a short period of time. There are few other alternatives that can be more beneficial for a blood thinning diet. Cinnamon can be added to baking deserts or curries in small amounts.

Water is another natural blood thinner. Just follow the link to see how water affects out blood. It is in your best interest to consume Water on a regular bases. If you wonder why, this is because our human body made up over 60% water.

With the lack of water erythrocytes starting to aggregate by forming a coin stack. This effect known as   Rouleaux formation. Glued erythrocytes impacting the blood viscosity and increasing a chances of heart attack as well as a stoke.

Doctors like H.H Mitchell, suggests that water should be included in a diet and at least 2 liters should be consumed through out the day.

Taking one to two teaspoons daily has many roles and benefits for the body, including releasing energy from food, providing amino acids which are building blocks that contribute to growth and function. Manuka Honey contains many minerals as well vitamins. The Iron is beneficial to red blood cells also known as erythrocytes. potassium for the heart, and calcium is beneficial for our bones and teeth.

Manuka honey or any Raw quality honey can also be considered as superfood. On another hand it many not be as much beneficial for a diabetic person because it increases a blood sugar level.

Based on Hematic Food YouTube experiment with a tea. Drinking either tea can beneficial because it improves blood flow. If you haven’t seen this experiment yet just scroll through the posts here or go to hematic youtube channel. There is also claim that green tea lowers blood glucose levels and improving insulin sensitivity.

Green tea also releasing a fluoride during infusion process. Fluoride helps to protect teeth from decay and maintain health of the bone.

Both teas contain caffeine, a known stimulant. Stimulant has it side effects but it is for another discussion.

Research discovered that Green tea is containing epigallocatechin-3- gallate (EGCG) antioxidant. This is the most powerful antioxidant many health benefits. Green tea has anti-inflammatory properties. Research claims that green tea also improves skin circulation when applied topically to the skin.

Tea can also be used to make desserts with a tea flavor, or tea-infused button, and/or simply to color your dessert. Some people also using tea in baking.

It seems that nature thought through in advance and created many natural products that can support our health when we need it. Even though natural substances can act as a natural blood thinner and prevent clotting to some degree, it many not be as effective as pharmaceutical blood-thinning medication.

While people can usually consume foods with potential blood-thinning properties safely in reasonable amounts, it is essential to speak to a doctor.